"It's a Trap!" How Congress Could Kill the Iran Deal 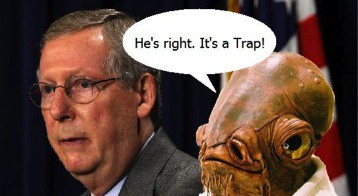 You wouldn’t know it by the way the Iran Nuclear Agreement Review Act of 2015 (a.k.a. the Corker-Cardin bill) passed in committee 19-0, that the lead up to that vote was an epic battle. Up until the day of the vote, the committee was largely divided on how to proceed, with Democrats leaning away from the bill and Republicans hoping to give it more teeth. Leading up to the vote, Obama had reaffirmed his veto threat and the bill seemed likely to collapse. But then something unexpected happened. Committee Chairman Bob Corker (R-TN) and Ranking Member Ben Cardin (D-MD) reached a compromise that removed some of the poison pill components of the bill and shrunk the review period in which Congress can cast a vote of approval or disapproval. Democrats fell in line behind the bill, Republicans begrudgingly held back on their poison pill amendments to maintain bipartisan support, and Obama realized his veto would be overridden, so he dropped the threat.

For pro-diplomacy advocates and anti-Iran hawks alike, this was a mixed bag. On the one hand, the passage of the bill in committee (followed by passage in both houses and Obama’s signature) sent a terrible signal to Iran and brought into question whether or not the US can uphold commitments it makes at the negotiating table. On the other, it set a relatively high bar for Congress to disapprove of the deal. Most of the talk about the Corker-Cardin legislation assumes that anti-Iran hawks will opt for a vote of disapproval, which Obama would be able to veto. The calculation that hawks would need two-thirds of both houses to override that veto has led to cautious optimism among pro-diplomacy advocates and a bit of an uproar among Republicans. The day the bill passed in committee, neoconservative commentator Bill Kristol tweeted “Corker-Menendez vote today probably helpful. But need to remember: The task is to kill the deal, not merely to complicate its trajectory.” Some went further, like George Rasley, an editor for Conservative HQ, who wrote an article titled, “Republican Senator Bob Corker is a Traitor.” Clearly, some Republicans felt that the Senator’s bill was in fact a carefully constructed trap designed to contain Republican opposition to the deal.

Before the Corker-Cardin bill rose to the forefront of the Iran discussion, another dangerous bill was in the works. The Kirk-Menendez bill would have passed new sanctions on Iran, violating the terms of the interim agreement, and caused the talks to fall apart. That sanctions bill fell to the wayside however after the framework agreement was announced and the pro-sanctions camp realized it didn’t have the votes. Republicans then turned to Corker, who had been quietly preparing his legislation to give Congress a say in any nuclear deal, and the saga of the Corker bill began. Having abandoned their previous efforts to pass new sanctions on Iran, many Republicans committed themselves to the Corker bill before realizing that they would need a veto-proof majority in both houses to actually kill the deal; hence the widespread channeling of Admiral Ackbar, a Star Wars character made famous for his exclamation, “It’s a Trap!”

Since then, Hawks have been setting traps of their own. Because so many Republicans have gotten behind the Corker bill, the chances of successfully passing a different bill aimed at taking down the nuclear agreement are slim. Unfortunately, there are other ways to block or complicate implementation of the deal. The Kirk-Menendez team for example, seemingly unphased by the failure of their brainchild (the Kirk-Menendez sanctions bill) two years in a row, recently introduced an amendment to the National Defense Authorization Act that would extend Congressional sanctions on Iran until 2026 instead of letting them expire in 2016 as is the current plan. The NDAA usually passes with plenty of bipartisan support because failing to pass it would present a political problem for everyone who voted no, which is probably why Kirk and Menendez chose the NDAA for their amendment. Extending Congressional sanctions to 2026 might or might not be something Iran is willing to ignore as long as the sanctions are suspended under the deal, but it would certainly give credence to the arguments of hardliners in Iran who are working to kill the deal. And considering the political battle underway in Iran over who will succeed the Ayatollah (who is in frail health), empowering Iranian hardliners could spell doom for the negotiations or the implementation of a final deal.

While that amendment didn’t make it into the NDAA that passed the Senate last week, there may be other traps in the works. Congress could opt for a vote of approval instead of a vote of disapproval. In that scenario, Republicans might try to attach poison pill amendments to that vote, which would place Democrats between a rock and a hard place. Without these amendments, Democrats would be inclined to vote for approval and Republicans inclined to vote against it. But adding contentious amendments at the last minute that would jeopardize the deal could leave Democrats scrambling to figure out how to vote and how to message their positions. In this scenario, amendments might try to defund the implementation of the deal, or stipulate which sanctions could be removed, or create some other unattainable requirement. Because there is a Republican majority in both houses, Senate Majority Leader Mitch McConnell and House Speaker John Boehner could theoretically get the votes to attach such an amendment to a vote of approval, which could increase their chances of actually killing the deal.

Of course, whether through a vote of approval or disapproval, if Congress passes legislation aimed at killing the nuclear deal, Obama will veto it, so the hawks would still need a two-thirds majority in both houses to kill the deal outright. And while that seems unlikely, they are far from giving up. Sen. Bob Corker (R-TN), presumably in an effort to add to their numbers and dispel the notion that he is a “traitor,” sent a public letter to President Obama railing against the concessions made thus far in negotiations. Sen. Tom Cotton (R-AK) recently reiterated his position that the Senate should need to ratify this deal with a two-thirds majority as if it were a treaty. And if history is any guide, some Democrats will vote against the deal as well. In 2014, under a Democratic Senate, there were 59 co-sponsors on the Kirk-Menendez Sanctions bill that would have derailed the negotiations. While moderate Democrats are not blasting the deal like many Republicans, some are positioning themselves in such a way that they can vote either way. That means that a two-thirds majority in both houses is not entirely out of the question.

However close we are to securing a strong diplomatic agreement with Iran, you can bet that hawks in Congress will not give in to diplomacy while they have a fighting breath left. Up until the deal goes into effect, and likely beyond that point, naysayers will work tirelessly to destroy or weaken the deal. This Summer will likely reveal the outcome of these negotiations, and the anti-diplomacy crowd won’t go down without a fight.