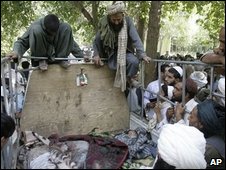 -Abdur Rahim, whose brother and son were wounded in a US missile strike

According to villagers in Kandahar, in the early hours of yesterday morning an American helicopter fired missiles, killing three young children and their older brother in their sleep. Residents of the village brought the four bodies to the house of the Kandahar governor from their village to protest, shouting “Death to America! Death to infidels!”  How does anyone think this is making America and Afghanistan safer? And why aren’t members of Congress speaking out against these bombings? Click here to write your representative and senators and urge them to call for a halt to airstrikes that kill innocent civilians.

General Stanley McChrystal, US commander in Afghanistan, has said the military is tightening restrictions on airstrikes. But rules get muddied in the chaos of battle. The US is claiming that the rockets shot that morning were aimed at men on motorcycles carrying jugs possibly filled with explosives, but those excuses don’t mean much to the people of Kowuk.

The UN reported last week that 1,013 civilians died in the first half of 2009, up 24% from the same period in 2008. July was also the deadliest month for US troops since the invasion in 2001.  With military advisers considering asking for even more troops in Afghanistan, this trend is only going to get worse. Increased civilian casualties make things less stable and serve as a recruiting tool for extremists.

The outraged cries of Afghans are not reaching the halls of Congress. We must raise our voices and demand accountability for these tragic mistakes. Write your letters now.

I’ll be visiting Rochester in AugustAfghanistan
Afghanistan: the view from the HillAfghanistan