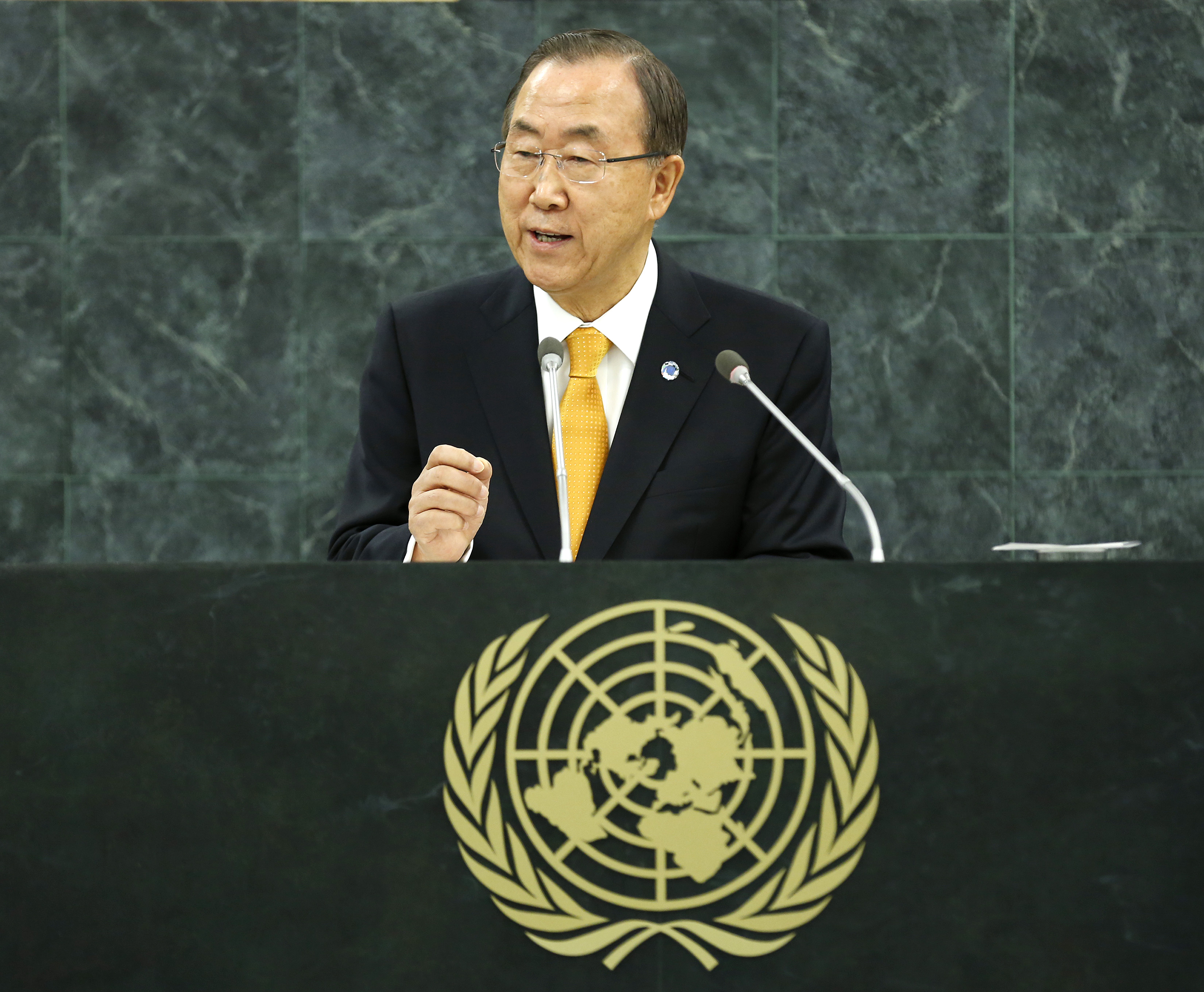 24 September 2013 – Declaring that “leadership makes the difference,” United NationsSecretary-General Ban Ki-moon today urged heads of State and Government gathered in New York to “hear the call of history” and, through hard work, commitment and integrity, answer the just demands of their people for human dignity and sustainable development.

“We come together not to preserve the status quo, but to drive our world forward,” said Mr. Ban, delivering his annual report on the work of the Organization and challenging Member States to take bold steps and work together to tackle a host of concerns – from crafting a post-2015 sustainability agenda, to agreeing on a new climate change regime and bringing parties in Syria to the negotiating table to end nearly three years of bloodshed.

“In the streets and squares across the world, people are pressing those in power. They want you, the world’s leaders, to listen. They want to know that we are doing all it takes to secure a life of dignity for all,” said the UN chief, ahead of the General Debate of the General Assembly’s 68th session.

While noting that the current era was one of wondrous opportunity, he said that the pressures on the planet and people are building. Young people are without jobs; the world’s climate is warming; and scattered conflicts remained unresolved. “Events are moving with 21st century speed, often outpacing the efforts of institutions and systems built for another age,” said Mr. Ban.

For more than a decade, the end of the year 2015 has been on the horizon. “What once seemed a distant moment is now just around the corner. It is the year by which the world has pledged to achieve the Millennium Development Goals (MDGs),” and in which the international community will adopt a new development agenda. It is also the year in which stakeholders have agreed to complete a global legal agreement on climate change.

“A new development agenda must be as inspiring as the MDGs, but it must go further,” the UN chief declared, urging a universal framework with ending poverty as a top priority, sustainable development at its core and governance as its glue. It must find expression in a single set of goals and the three dimensions of sustainable development must be treated equally: there must be no deferring the environment or social injustice until later, once economic growth is ensured.

Moreover, the rights of women and girls must be at the heart of all such efforts, he continued, calling for the 21st century to be the century of women.

Turning to climate change, the Secretary-General said the impacts of the phenomenon “threaten all our development gains.” Indeed, the rising human and economic toll affects everyone, with the world’s poorest and most vulnerable people harmed “first and worst.”

Nevertheless, while the planet and its scientists were sending a clear message, “there is opportunity amid this peril,” and he invited all delegations to attend a climate summit in New York at this time next year to identify ways to “change the way we do business, plan our cities, fuel our homes and factories, and move our goods and ourselves.”

He challenged Member States to bring bold pledges to the summit that will help close the “emissions gap” and put the world on track for an ambitious legal agreement through the UN Climate Change Convention framework. “Let us seize the 2015 challenge: a final push for the MDGs, new direction on energy and climate and an inspiring new development framework,” he declared.

Turning next to what he called the “biggest peace and security crisis in the world,” Mr. Ban said the crisis in Syria, where well over 100, 000 people have been killed and over 7 million have fled their homes, has destabilized the Middle East. “We have seen the worst chemical weapons attack on civilians in a quarter century,” he said, also underscoring that a “lost generation” of young people now filled refugee camps.

“We face a moment of reckoning. The Syrian Government must fully and quickly honour the obligations it has assumed in acceding to the Chemical Weapons Convention,” he declared, adding that the international community must bring to justice the perpetrators of chemical weapons use, and, with equal determination, ensure the safeguarding and destruction of Syria’s chemical weapons stockpiles and programmes.

At the same time, he stressed that the majority of the killings and atrocities in the country had been wrought by conventional weapons and he appealed to all States to stop fuelling the bloodshed and to end the arms flows to all parties.

“I look forward to the imminent adoption of an enforceable Security Council resolution on chemical weapons,” the UN chief said, which should be followed up immediately by humanitarian action. In that context, UN human rights monitors could play a more useful role in reporting and deterring further violations.

“I call on the Syrian Government and the opposition to uphold their obligations under international humanitarian and human rights law,” he said, urging them to lift all obstacles to humanitarian access and end the “unconscionable” targeting of medical facilities and personnel.

Full accountability for serious international crimes is also vital, Mr. Ban continued, noting such steps as referral to the International Criminal Court (ICC) or through other means consistent with international law.

“The response to the heinous use of chemical weapons has created diplomatic momentum – the first signs of unity in far too long. Now we must build on it to get the parties to the negotiating table,” he said, as the only answer is a political settlement.

In that context, he appealed to the Syrian Government and the opposition – and all those in the Assembly hall with influence over the parties – to make the so-called “Geneva II” conference a reality. “It is time to end the killing and to reach the peace the Syrian people need and deserve,” he said.

The Secretary-General went on to note that the historic transitions in the Middle East and North Africa have stumbled or slowed, and that springs of opportunity are giving way to winters of disillusionment. Yet, amid immense challenges, the story of the region was still being written, and he urged the international community to seize potential openings and respond to declarations of good will.

He welcomed the re-engagement of Israelis and Palestinians in direct negotiations, “and the bold diplomacy that made this possible.” He urged the parties to show leadership on the ground and noted that the diplomatic Quartet on the Middle East peace process will meet on the margins of the General Debate later in the week to lend its support.

Turning to Africa, where he saw the continent’s people writing new chapters of dynamism, democracy and sustained, impressive economic growth, Mr. Ban noted that while political progress in Somalia and the new framework for hope in the Democratic Republic of the Congo (DRC) “are gains to build on,” misery and volatility still haunted the Sahel region.

Further, there had been a breakdown in law and order in the Central African Republic (CAR) and while millions of people were suffering there, the UN humanitarian appeal was “woefully underfunded.”

And in just the past week, in appalling attacks in Kenya, Pakistan and Iraq, the international community had been reminded of the ability of terrorists to wreak havoc.

“Throughout the world we see again the centrality of human rights and the rule of law as foundations of stability and coexistence,” he said, and in that context urged Member States to reinforce their commitment to the ICC and made a special appeal on behalf of the Extraordinary Chambers in the Courts of Cambodia, which faced a “deep and chronic” funding shortage that had now put its very survival in question.

As for human rights, he said the inability of Member States and the UN to prevent and end large-scale rights violations “has had disastrous consequences.” An internal review of UN action in Sri Lanka identified systemic failure: Member States did not provide the Organization with support to meet the tasks they themselves had set, and the UN system did not adapt properly or deliver fully.

Recalling that 2013 is the twentieth anniversary of the Vienna Declaration on human rights, the Secretary-General pledged to do more to help Member States reach early consensus to prevent large-scale rights violations. He added that he was implementing recommendations to ensure that the UN system upholds its responsibilities under the Charter.

“There will be little peace or enjoyment of human rights unless we confront a world awash in deadly weapons,” he said, hailing the adoption earlier this year of the Arms Trade Treaty. At the same time, nuclear disarmament was languishing and deadly weapons were proliferating. The Comprehensive Nuclear-Test-Ban Treaty (CTBT) was still not if force and small arms continued to kill and maim. And, at a time of pressing human need, “spending on weapons remains absurdly high,” he said, urging the gathered leaders to “get our priorities right and invest in people instead of wasting billions on deadly weapons.”

“You can be the [leaders] who preside over the end of poverty, give voice to the will of the people and usher in an era of sustainable development and lasting peace,” the Secretary-General said, urging delegations to “embrace the logic of our times” and seek even deeper cooperation on finding new ways of governing, partnering and problem-solving.

“Let us empower the United Nations to be more than a first responder or a last resort,” he said, adding that while change is inevitable, progress is not. “Leadership makes the difference,” he stressed.

“You in your home countries and we here together are at a privileged pinnacle. We must prove ourselves fit for purpose. We must listen to the demands of the world’s peoples and heed the call of history. We speak often of hope. Our duty is to turn hope into action, through hard work, commitment, skill and integrity. With passion, but most of all compassion, we can build the future your people want and that our world needs.”