Peace Action Speaks to No Nukes! Women's Forum in Hiroshima 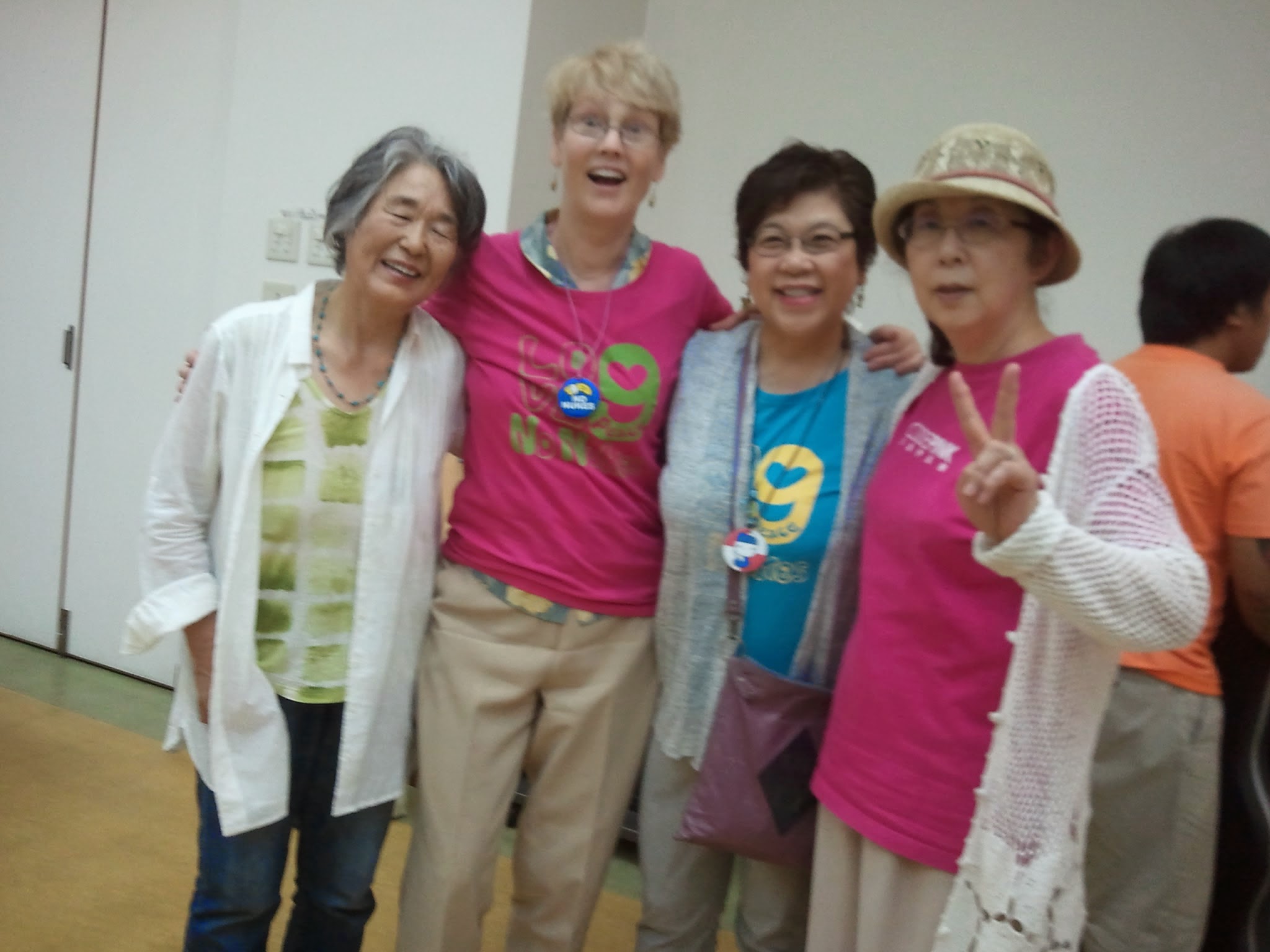 We are proud that Sally Jones, Chair of the Peace Action Fund of NYS spoke on August 5 in Hiroshima to the No Nukes! Women’s Forum. Here is her speech:

Dear women of the Japanese nuclear abolition – No Nukes! – movement!

Greetings from Peace Action.  From Staten Island, New York City (where I live), from New York State, and from all the 90,000 members of Peace Action all over the U.S.A.

For me it is an honor of a lifetime to be here with you today and especially to be talking to a women’s peace group.

I want to talk to you about my work with Peace Action with particular attention to the 2015 NPT (Non-Proliferation Treaty) action that will take place in New York City next spring.

Since 2002 I have been a Peace Action volunteer when I helped form a Peace Action chapter where I live on Staten Island.  We are community members from all walks of life who are against war and nuclear weapons.  We do a lot of local actions, educational programs, and partner with other local groups who care about our issues.

On August 10th, my Staten Island friends are organizing a program called “Staten Island and the Bomb.”  Tons of uranium ore from what was then called the Belgian Congo was stored under the Bayonne Bridge near where I live from 1938 to 1942.  The land there is still radioactive.  We want Staten Islanders to learn how and why they are connected to the nuclear bomb attacks on Hiroshima and Nagasaki.

Staten Island’s Peace Action chapter is one of many affiliates all over the U.S.A.  Since I first got involved with Peace Action in 2002, I joined the New York State steering committee and the national Peace Action strategy sessions.  In 2002 and early 2003 we sincerely believed that we could prevent the U.S. from attacking Iraq.  Preventing war is what we must do.  Unfortunately, we didn’t prevent the U.S. attack on Iraq.  But that makes us even more determined to prevent future wars.

In the U.S.A., Peace Action members work very hard to stop the U.S. government from using its awesome military power and instead we push for moving the money from the military and security apparatus to fund human needs.  That includes constantly pushing back on funding for nuclear weapons.

Peace Action has had a New York City presence since it began in 1957.  We have an office in downtown Manhattan.  Our Peace Action International affiliate is a United Nations NGO, and we work with the International Peace Bureau representative, Cora Weiss.

Our New York City presence situates us to be very helpful in organizing the international NPT actions  In 2010, Judith LeBlanc worked out of our office to coordinate the successful international conference at Riverside Church and the rally and march to the United Nations.  We are part of a team from our national office in Washington DC and affiliates in New Jersey, Pennsylvania, Maryland, Massachusetts, and Connecticut who work in concert to mobilize for No Nukes.

We are preparing to do this again for 2015.  PANYS will be part of the September 19th coordinating committee meeting taking place in NYC where we will work alongside Judith LeBlanc and Joseph Gerson and the other organizers.

Coming off the People’s Climate March in New York City this September 21st , the many anti-war activities being organized around the 100th anniversary of the World War I Christmas Truce, the momentum of the ban the bomb movement and the publicity around the lawsuits against the nuclear armed states, excitement is building for the 2015 NPT.

The international conference and actions will bring thousands of activists together who will insist on being heard on the world stage.

Happily, we have a different New York City Mayor and City Council leadership in 2015 than we had in 2010.  My dream is for our new NYC Mayor Bill DiBlasio to welcome the Mayors for Peace and give them the public respect and honor that is long overdue. 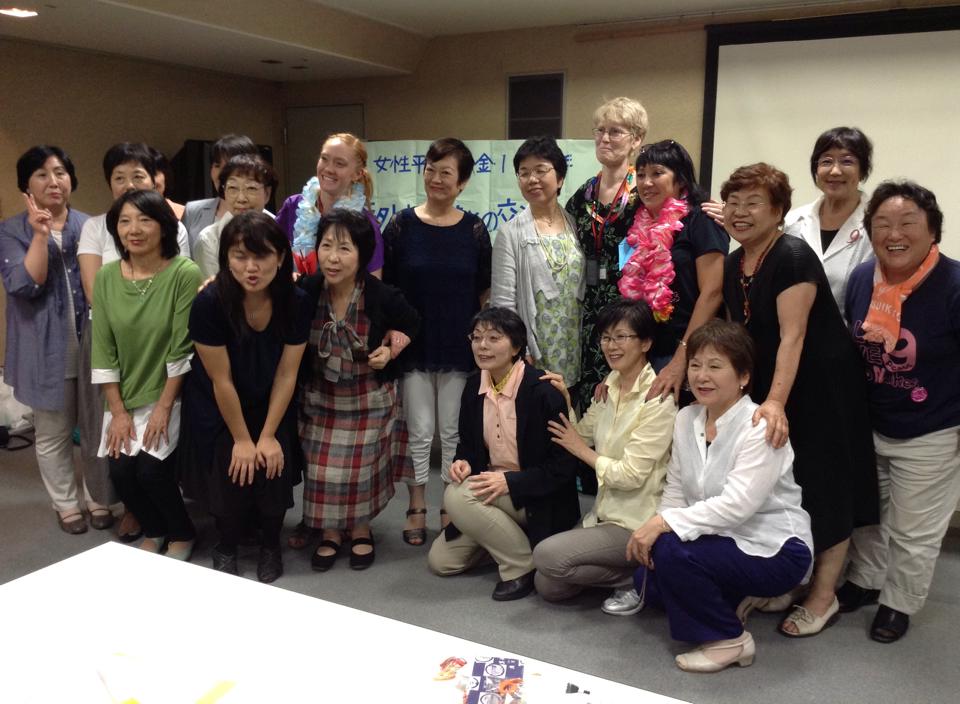 One of our most important projects at Peace Action NYS is building up a student chapter network.  We began this project in 2010 with a small grant.

We have 4 official student chapters now, three more starting up in the fall and more on the way.  The idea is catching on and we hope to develop a model that will be picked up all over the U,S.A.  The 2015 NPT conference and actions should be a catalytic event for young people.  The experience of meeting with Hibakusha and hearing first hand about the horrors of nuclear weapons has the power to transform lives.  Our planning will take this into account.

In Peace Action, women are integrated in every aspect of what we do. Last year, you met Judith LeBlanc, the national field director for Peace Action.

She sends her greetings to her friends in Gensuikyo. On a personal level, my identity as a woman is so steeped into who I am and what I do that, I confess, I don’t give it much thought.  But I know it is part of every breath I take. I am a mother and grandmother.  I lost my own 95-year old mother 5 months ago on March 7th.  How lucky I have been to have been loved by her unconditionally and without bounds.  That is the love I carry within and hope to pass on to my children and grandchildren, and which I hope infuses my work.

The role of women in our movements reflects the societies we come from.  We are all determined to work for a nuclear-free world and we should use every tool in our toolkit.  I am very interested to learn how you do that in Japan.  In the U.S., we use our relatively new-found powers – gained thanks to the women’s movement – to take on as much responsibility as we can handle.

We have a phrase – “Go, Girl!” – that we use to signify to each other to just go ahead and do what you need to do.  The phrase implies solidarity and that the rest of us women “are behind you 100%.”

That’s the spirit I carry inside me, too.  Love and power.  The power of love.  We all have a very short time on this planet to help spread a vision of peace and justice with no nukes and no war and we need to use all of our “girl powers” to get it done.