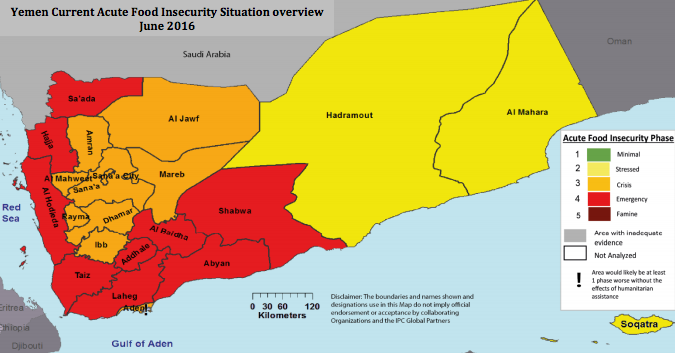 Yesterday, the United Nations released a report saying that more than half of Yemen’s population is now food insecure. Out of Yemen’s 22 governorates, 19 are facing “severe food insecurity,” and as long as the conflict continues, there’s little hope that access to food will improve. The Integrated Food Security Phase Classification (IPC) also confirms that “about 51% of the population is suffering from food insecurity and malnutrition.” That is a 9.4 percent increase according to the IPC’s previous analysis in June 2015.

Yemen’s increase in food insecurity is unfortunately just one aspect of Yemen’s suffering. The restriction on commercial and humanitarian imports, mass displacement of people, high price of fuel, food, and other essential commodities, have all all contributed to Yemen’s humanitarian catastrophe. In a country that imports 90 percent of its staple foods, fuel shortages and import restrictions are particularly harsh. Furthermore, in a country where about 50 percent of the labor force comes from the agriculture sectors, shortages of seeds and fertilizers have devastated crop production and the economy. Making matters worse, Yemen experienced two cyclones in November 2015, and flash floods and locust swarms in April 2016. The World Food Program Deputy Regional Director Matthew Hollingworth reported in December 2015 that “half of the country is now just one step away from famine.”

The UN Office for the Coordination of Humanitarian Affairs (UNOCHA) further quantified the situation in March:

One year after armed conflict escalated across Yemen, an estimated 21.2 million people – 82 per cent of the total population – need some form of humanitarian assistance. This includes 14.4 million people unable to meet their food needs (of whom 7.6 million are severely food insecure), 19.4 million who lack clean water and sanitation (of whom 9.8 million lost access to water due to conflict), 14.1 million without adequate healthcare, and at least 2.7 million who have fled their homes within Yemen or to neighbouring countries.

According to CARE, Yemen has the highest level of humanitarian need in the world.

Children have been particularly hard hit by the war in Yemen. In March, UNICEF reported that 320,000 children are at risk of severe acute malnutrition. It also estimated that “nearly 10,000 children under 5 years may have died in the past year from preventable diseases,” due to lack of access to medicine, healthcare providers, and healthcare facilities. As we previously reported, the U.S.-backed Saudi-led coalition was added to the UN’s ‘blacklist’ of children rights violators after the UN found that 60 percent of the child casualties in the war were caused by the coalition. Unfortunately, the UN removed the coalition from the list pending a joint investigation after Saudi Arabia and other coalition members threatened to pull hundreds of millions of dollars from UN counterterrorism and humanitarian aid programs. UNICEF reported that on average, at least six children get killed everyday as both sides continue to violate children’s rights and international humanitarian law.

Throughout the war, both sides have used indiscriminate weapons and committed unlawful attacks (see here, here, and here), claiming 2,795 civilian lives in 2015. And without a doubt, the US role in the war in Yemen has done far more to add to Yemen’s suffering than to end it. Perhaps with half of Yemen’s population on the brink of starvation, the U.S. should focus less energy on facilitating an ill-advised intervention and more on feeding people and facilitating a diplomatic solution to the conflict.