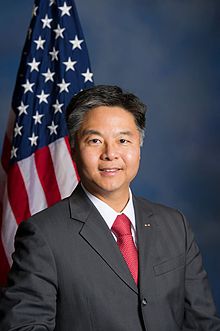 Today, a group of 64 House representatives sent a bipartisan letter to President Obama asking that he postpone the sale of $1.15 billion worth of weapons to Saudi Arabia until Congress has had a chance to debate and vote on the arms deal. After 17 months of U.S. support for a Saudi-led military intervention in Yemen that’s killed thousands of civilians and fueled violent extremism in the region’s poorest country, a growing number of lawmakers have apparently had enough.

The letter was spearheaded by Rep. Ted Lieu (D-CA), who started raising concerns about civilian casualties in Yemen last fall, and has since become one of the loudest opponents in Congress of U.S. support for the war. Alongside Lieu, this  initiative was co-led by Reps. Ted Yoho (R-FL), John Conyers (D-MI), and Mick Mulvaney (R-SC).

The letter was necessary in large part because the arms deal was announced during a Congressional recess, leaving lawmakers just one day once they returned to the Capitol to review, debate, and vote on the proposal, rather than the 30 days they are typically allotted for arms deals.

Adding to the urgency of the letter was the recent string of devastating attacks carried out this month by the Saudi-led coalition. Since peace talks between the coalition and Yemen’s Houthi rebels broke down in the first week of August, the coalition bombed a school, a marketplace, a food factory, a hospital supported by Doctors Without Borders, and a bridge vital to the delivery of humanitarian aid, in total killing at least 68 civilians, and injuring many more.

Whether or not the Obama administration will adhere to the beyond reasonable request of a significant block of Congress, whether Republican leadership in Congress will allow a vote, and whether a majority of Congress will vote against this ill advised arms deal if given the chance all remains to be seen. What is certain is that opposition to U.S. support for the war is steadily growing, and Peace Action will continue working to strengthen that opposition. Peace Action thanks these representatives and stands with them in calling on the President to postpone this arms deal pending a substantive debate. Furthermore, we urge all Members of Congress to join these lawmakers in speaking out for the wellbeing of civilians in Yemen, and for a commonsense foreign policy that protects the national security of the United States, which U.S. military support for the Saudi coalition has been undermining for 17 months now.

On August 8, your administration notified Congress of intent to sell $1.15 billion of weapons to Saudi Arabia, including tanks which would replace tanks destroyed in Saudi Arabia’s war against Houthi rebels in Yemen.

We respectfully urge you to postpone this plan and withdraw the notification for the following reasons.

Past Congressional concerns about Saudi Arabia’s war in Yemen have not been addressed. In October, Members of Congress wrote to you urging greater efforts to avoid civilian casualties in Yemen and achieve a diplomatic solution to the conflict. In June, 204 Members of the House, including 40 Republicans and all but 16 Democrats, voted to block the transfer of cluster bombs to Saudi Arabia after reports of their use in civilian areas in Yemen. Yet, just in the last several days, a Saudi airstrike on a school in Yemen killed 10 children – some as young as 6-years-old – and a Saudi airstrike on an MSF hospital in Yemen killed 11 people.

Indeed, Amnesty International has documented at least 33 unlawful airstrikes by the Saudi Arabia-led coalition across Yemen that appear to have deliberately targeted civilians and civilian facilities, such as hospitals, schools, markets, and places of worship.  These attacks may amount to war crimes.

This military campaign has had a deeply troubling impact on civilians. According to the UN Office of the High Commissioner for Human Rights, 3,704 civilians, including 1,121 children have been killed during the conflict. 2.8 million Yemenis have been internally displaced by the fighting, with 83 percent of the population now dependent on humanitarian assistance for survival. Any decision to sell more arms to Saudi Arabia should be given adequate time for full deliberation by Congress.

We are concerned, however, that the timing of this notification during the August Congressional recess could be interpreted to mean that Congress has little time to consider the arms deal when it returns from recess within the 30 day window established by law. We are not aware of any compelling reason why Congressional approval of the sale could not be postponed to allow for meaningful Congressional debate on this issue that has major implications for both civilians in Yemen as well as our national security.

In announcing your decision to seek Congressional authorization for the use of force against the Syrian government in 2013, you stated that: “I’ve long believed that our power is rooted not just in our military might, but in our example as a government of the people, by the people, and for the people.” We strongly agree. We urge you to delay this proposed arms deal so that the people’s representatives in Congress can give these issues the full deliberation that they deserve.

Thank you kindly for your attention to this matter.