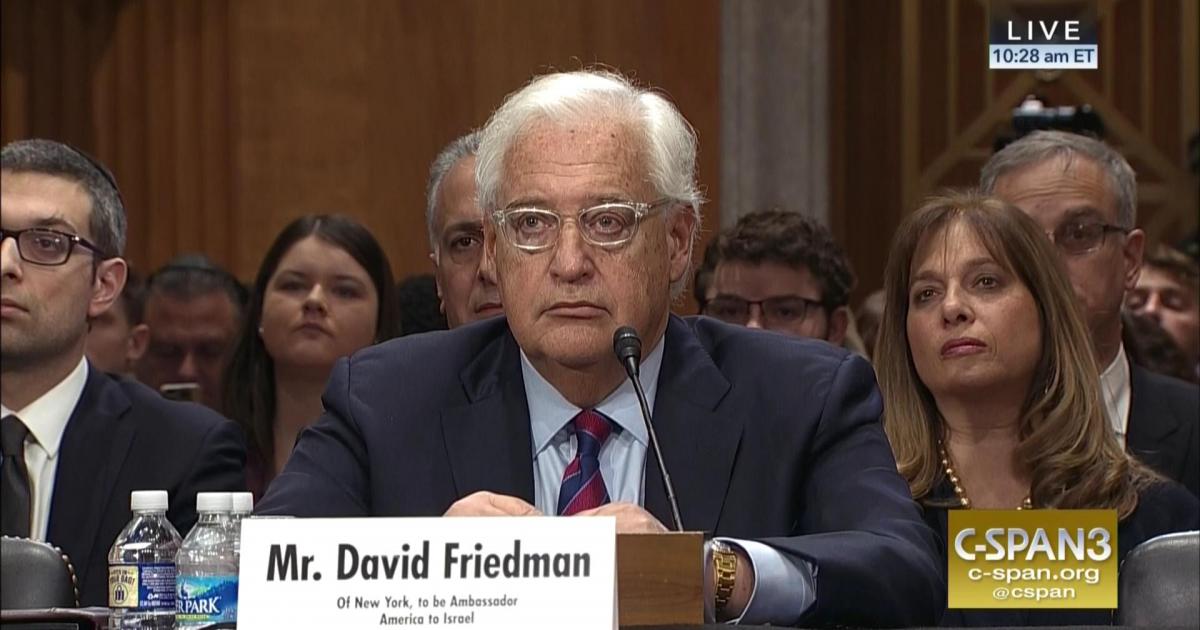 Today the Senate Foreign Relations Committee voted to send the nomination of David Friedman as Ambassador to Israel to the full Senate for consideration. The 12-9 vote broke largely along party lines with the exception of Sen. Bob Menendez (D-NJ) who sided with Republicans.

Friedman has managed to fly somewhat under the radar during the Cabinet confirmation process. He served as President Trump’s bankruptcy lawyer and has no diplomatic experience; he fits right in with the president’s other unqualified appointments. But more than his lack of qualifications, his penchant for inflammatory remarks and dangerous policies make him a terrible choice for a position requiring finesse and sensitivity.

Friedman’s history of slader includes casually labeling Barack Obama, John Kerry, and the entire State Department as anti-Semitic; referring to the Anti-Defamation League “a bunch of morons;” and smearing Jewish supporters of J Street as “worse than kapos” – referencing Jews who were assigned to supervise their fellow prisoners in concentration camps. Senator Tom Udall (D-NM) correctly cautioned that an affinity for such vitriol in an ambassador could “inflame a volatile situation… We need a steady hand in the Middle East, not another bomb thrower.” Friedman, whose positions run counter to decades of bipartisan U.S. foreign policy, would surely be the latter.

His apparent determination to change long-standing U.S. policy on Israeli settlements in the West Bank is particularly troubling. As an enthusiastic supporter of settlements and their expansion, Friedman has contested their illegality, despite the United Nations ruling them a “flagrant violation under international law.” He has also raised millions of dollars for additional constructions to the Beit El settlement, and even advocated that Israel annex territory in the West Bank, a stance more extreme than Prime Minister Netanyahu’s. This is particularly problematic because these settlements are seen as one of the major diplomatic hurdles to a two-state solution, since their growth makes it logistically difficult to create a viable Palestinian state.

The two-state solution has been the cornerstone of negotiations since the Oslo Accords, and has repeatedly been called “the only way to achieve a just and lasting peace between Israelis and Palestinians.” Yet, Mr. Friedman does not appear to be interested in pursuing a two-state solution, having described it as a “scam,” meant to present a “narrative” of an “illusory solution in search of a non-existent problem.” Describing the Israeli-Palestinian conflict in these terms is nothing short of delusional.

To top it all off, five former U.S. ambassadors to Israel from Democratic and Republican administrations warned the Senate Foreign Relations Committee of Friedman’s “extreme, radical positions,” and expressed their view that he is “unqualified for the position.”

The full Senate vote will be scheduled soon on Friedman’s confirmation. Call your Senators and urge them to vote for peace and against appointing an ambassador who would undermine it. The Capitol switchboard number is 1-202-224-3121. The operator will connect you with the office you request.